In the not-too-distant future, THE YEAR 1999 fallout from THE WAR has caused RADIOACTIVE MUTANT SLIMES to appear in the sewers of THE CITY. You are a GENETICALLY-MODIFIED PRECOG SUPER-SOLDIER, whose free-will was in-part  traded for the power to PREDICT THE OUTCOME OF COMBAT ENCOUNTERS. Go into the sewers and ELIMINATE THE SOURCE OF SLIME!

The outcomes of all attack and defence are pre-determined and shown to the player. Fight your way through 6 procedurally-generated levels of slime-infested 1980's imaginings of what sewers might look like in 1999, and manage your sequences of combat outcomes to defeat the source of slime at the bottom of the sewer.

Playing in a browser? This game renders as literal text in the dom. Be sure to disable dark mode or other colour-changing browser extensions or things might get weird.

Really enjoyed this! Played quite a few rounds.

Couldn't quite figure out everything though, for example why i would 'discard' something.

The idea of this is very cool. Its really interesting to play out these battles with full knowledge. I love the color palette and the music. Dang if it isn't hard though, I got obliterated like 4 runs before giving up heh. Awesome!

Cool game!  being able to react to the enemy actions a turn early was very fun, and not as op as it sounds due to the deck-like style of att and defense.  I will admit I wasn't really sure how defense played into combat, and teleport was really disorienting being instant.  I did manage to beat it on my 2nd run though!  Was starting to get really low on attacks until I got some lucky drops from the spawn of the first boss (a 57 vs the 2nd full hp boss did wonders)

I love the theme. The colors, icons and music express it perfectly. The combat system is interesting—the initial skill selection is confusing without having played before, but I picked it up quite easily after that. I'll have to play some more.

I couldn't hear the sound or music, but I gotta say this game is pretty dang great. Colors, theme, combat system was pretty fun!

Thanks! Were you playing in a browser or did you download the game to play locally? The downloadable version has the sound disabled due to a bug I found on the last day of the 7DRL. The sound in the browser version should work, but you may have to give the page permission to play sound.

I really liked the colors and style - very cool :) 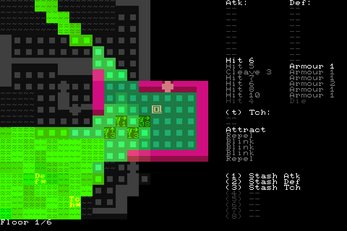 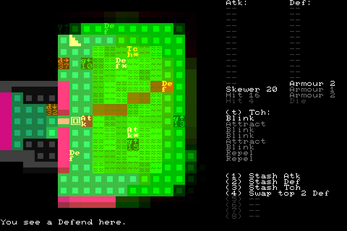 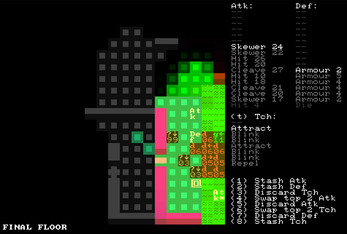 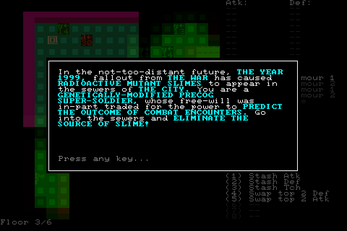